Cape Malay cuisine is the prime example of South Africa’s multicultural kitchen. It draws on a rich heritage stretching centuries back to the Far East and middle Europe, but is today firmly rooted in the brightly coloured neighbourhood of Bo Kaap in central Cape Town.

“This is the best place in the world. I can’t explain it. Everyone knows everyone,” says Salie Charles, the husband of Abieda Charles, who offers Cape Malay cooking classes in a house perched high on the ridge on the top of Upper Bloem Street.

From the balcony you have a stunning view of the colourful Bo Kaap down to the Cape Town harbour, the ocean and Robben Island in the distance. Table Mountain rests majestically to the side. As the fisherman’s bugle sounds through the streets and the Cape Town cannons salute midday, Salie entertain with tales from the neighbourhood.

“On Sundays you can see how the cars line up down there as people come for koesisters. It’s a must for us. If you haven’t had a koesister then it’s not been a Sunday morning.” Like koeksister, the twisted syrup-coated doughnut of Afrikaner culture, the Cape Malay koesisters are sweet doughnuts, but round, spiced with cinnamon and ginger, and coated in syrup and grated coconut.

The Cape Malay community is Muslim, descendants of a mix of slaves brought to the Cape colony from the 17th century onwards, the original indigenous Africans of the region and European settlers, mainly Dutch and French. Its kitchen brings together the spices and cooking techniques of this rich but often violent history, to what is today perhaps the most cherished of South African cuisines.

It is very hard to determine the national dish of South Africa, as it will depend entirely on who you ask in one of the world’s most multicultural societies. The bobotie, a European-style mince pie spiced with curry and served with sliced banana and coconut, stand a good chance though. It is the centerpiece of Cape Malay cuisine.

The lunch that Abieda prepares bears strong resemblance also to Indian cuisine, with samosas, chicken curry and rotis, and cucumber and tomato salad. The spices include garlic, ginger, cinnamon, cardamom, leaf masala, curry powder, turmeric and jeera – all likely staples in a kitchen in Dehli or Mumbai, and certainly on the strongly Indian-cultured East Coast of South Africa.

“You can’t really differentiate between the two, because we have learnt the spices from them. But Indian curries are more spicy and more oily than Cape Malay curries,” says Abieda.

To make Abieda’s samosas you need to visit the popular Atlas Trading House down the road. The Atlas Trading Fisherman Spice is an absolute must to give the vegetarian filling of corn, cheese, onion and spring onion the right taste, Abieda insists. Folding the pastry triangles with the filling inside turns out to be quite a challenge for those of us with no previous practice, but Abieda has a few tricks to share. 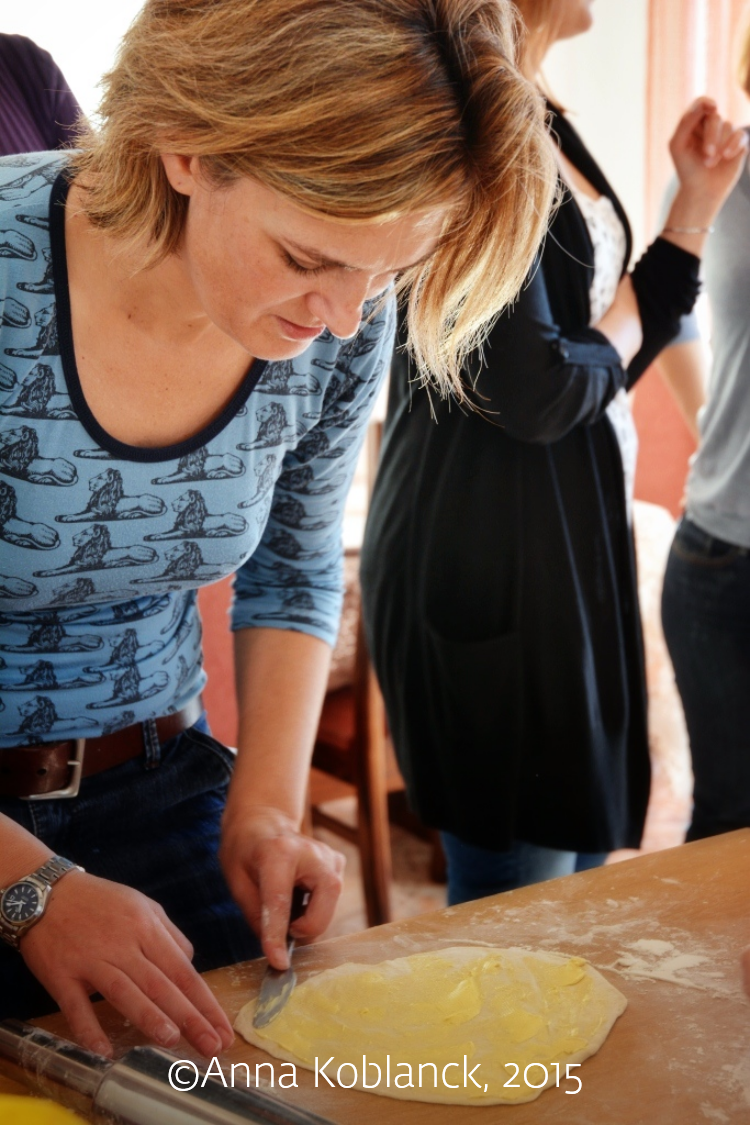 The lunch eventually served on the beautifully laid table, with the traditional lace cloth and pink Falooda drinks, is a feast for the eye as well as the taste buds. Spiced with Salie’s wonderful stories and sprinkled their son little Jamal’s tricks, it is a lunch to cherish. A day in Abieda’s kitchen adds depth, history and culture to any visit to Cape Town. One thought on “In Abieda’s Kitchen – A Cape Malay lunch, South Africa”