As the rich aromas of a mix of tomato, onion and chili pepper rise from a sizzling pot on the stove to fill the hot and humid kitchen of Ozoz Sokoh in Lagos, we talk about one of the greatest scandals in African cuisine of late: when Jamie Oliver cooked Jollof rice. Or rather, when he didn’t. The recipe of ‘Jollof rice’ that he posted on his website in June 2014 was so far from the original that he cooked up a social media storm rather than the traditional West African culinary treasure he was aiming for.

‘You can mess with a lot of things, but you don’t mess with our Jollof rice. It’s the heart of West African cooking. In fact, you can’t have a proper party in Nigeria without Jollof rice,’ says Ozoz. ‘It’s fine if you say your dish is inspired by another dish, but then you have to be very clear about that,’ she adds.

The recipe posted on Jamie Oliver’s website was labeled ‘Jamie Oliver’s twist’ on Jollof rice, but with ingredients such as parsley, lemon and vine tomatoes, it was just too far from the original. Thousands of outraged comments and tweets tagged #Jollofgate followed once it came to the attention of the West African online food community. 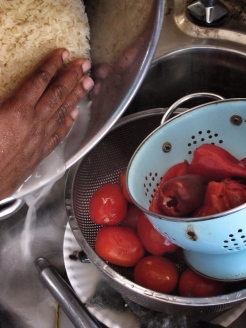 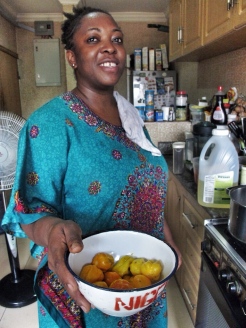 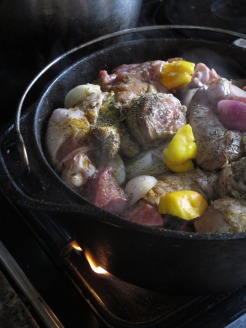 Food blogging is a big thing in Nigeria, and Ozoz, aka The Kitchen Butterfly, is one of the most prolific and cherished online food personalities. Her blog is equal parts recipes, hands-on cooking instructions, examinations of ingredients, and curious journeys into African culinary history. A long-time admirer of her writing as well as her photography, I reached out to her prior to a recent trip to Lagos to ask if she would be happy to meet up for a chat about food blogging, Nigerian dishes, Lagos, and photography.

Within an hour I had received an email back, inviting me to her home for a day to cook together. The Saturday I knock on her door she has stocked up with a range of ingredients and spices to make Jollof rice, snails, moin-moin, dodo (fried plantain) and poached pawpaw (papaya) for dessert, and for the following seven hours we rinse, chop, mix, fry, stew, stir, grill, deep-fry, eat, and consult cookbooks together, whilst chatting and photographing it all in one wonderful gastronomic extravaganza. 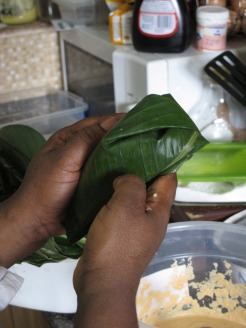 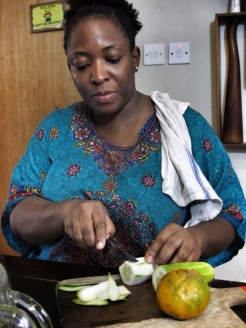 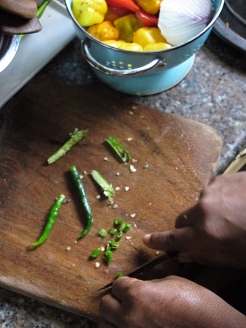 Contrary to many food blogs that are devoted to original West African recipes, Ozoz likes to experiment and venture into the new. It’s one of the things I love about her blog. She picks an ingredient here and a technique there, and combines them into innovative dishes. Her blog features ground-breaking delicacies such as Agbalumo and Mango Tarte Tatin, Palm Oil Vinaigrette and Tigernut Caffe Latte; the work of a culinary artist.

“For anything to grow, there has to be exploration,” she says. 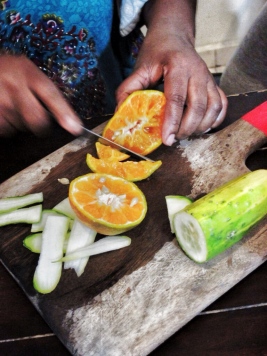 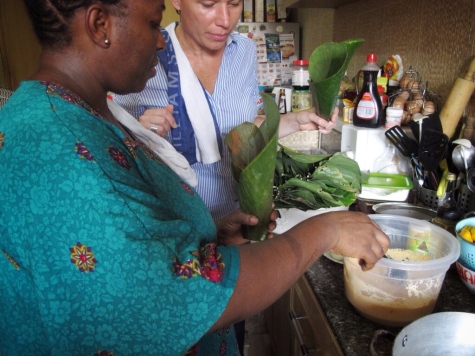 On the day we cook together in her Lagos home, we make pawpaw poached in ginger, green cardamom and scent leaves. It’s a subtle, herby dessert that tastes quite different from anything I have tried before.

‘I love scent leaves. They are very common in the cooking of southern Nigeria, where I come from, although generally used for savory dishes, like pepper soup, for example.’ 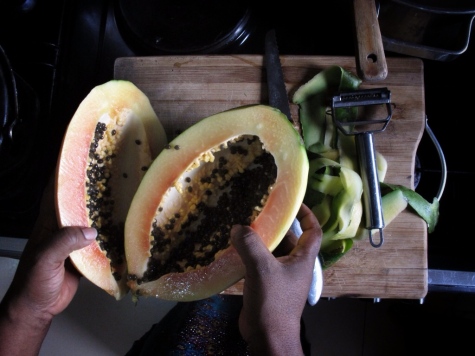 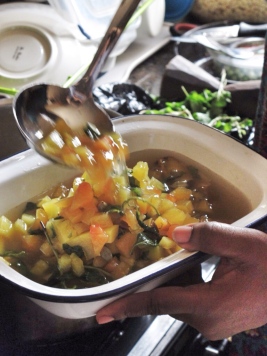 Ozoz knows her traditional dishes too, and she’s an expert on Jollof rice. Variations of Jollof rice are cooked across West Africa, from Nigeria to Senegal, where it is called Thieboudienne. In one of Ozoz’ many blog posts on the dish you learn that it is thought to originate from the Wolof people of Senegal, Gambia and Mauritania, taking it’s name from the word ‘power’ in the Wolof language and spreading with traders throughout the region.

“It makes sense that it’s called Thieboudienne instead of Jollof in Senegal if that’s where it comes from. Makes sense that the rest of us call it by its place of origin,” says Ozoz. 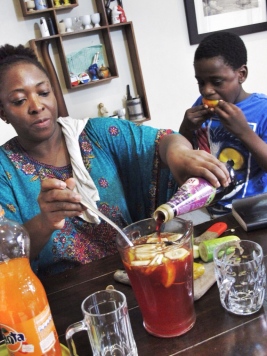 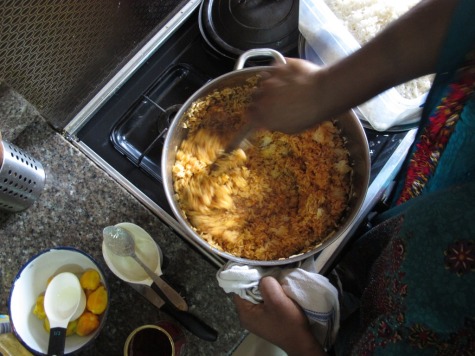 We start our Jollof rice by cooking the chicken and beef that will go with it. In a large iron pot on the stove, Ozoz mixes raw pieces of chicken and meat with large chunks of red onion (onions in West Africa tend to be red onions) and garlic, and sprinkles a generous amount of curry powder (Jamaican-like rather than Indian-style) plus dried thyme on top. Most West African cooks would also add a Maggi cube or two, but Ozoz is not too fond of the intensely marketed stock cubes.

‘The traditional way to make it is with long-grain rice. When I grew up it had to be Uncle Ben’s rice. Uncle Ben’s was synonymous with Jollof rice. I don’t think the brand is as dominant anymore.”

“Personally, I prefer to use basmati rice as the grains are delicate, not as meaty as long grain. On the other hand, that’s also why long-grain rice slow-cooks so well. With basmati it quickly gets broken and mushy.’ 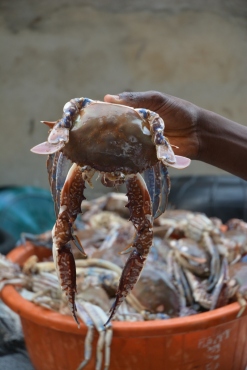 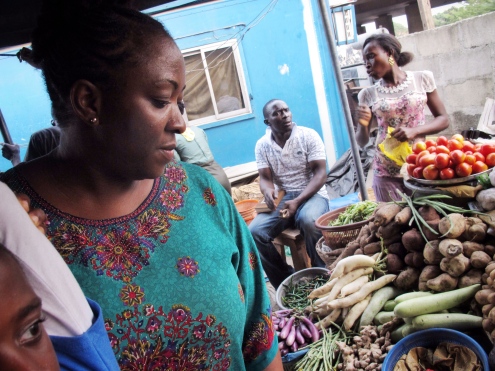 For my sake, we cook the traditional version. Once the chicken and stock is cooking on the stove, we make the tomato base that gives Jollof rice it’s characteristic red or orange hue. Ozoz combines tomato, red onion, bell peppers (scotch bonnet), and a larger pepper-like vegetable called tatashe, in a mixer and blends. She also adds tomato paste.

“The first time I cooked Jollof rice it was a disaster. I didn’t understand the ingredients, the order, or the proportions. It’s important not too use too much liquid. The rice should steam, rather than cook. Every time I cook it, I try to perfect it,” says Ozoz. 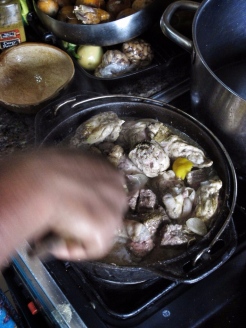 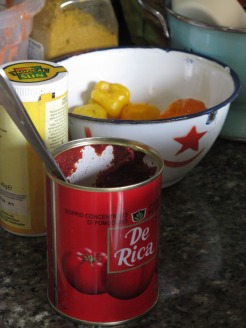 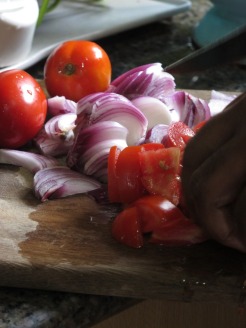 When the aromas of the tomato base fill the kitchen, she adds the slightly pre-cooked rice and stirs. Then she takes the cooked chicken and meat pieces out of the pot on the stove and places them on a tray in the oven to roast, while she pours the stock into the pot with the rice and tomato to cook to perfection. When we sit down to eat it a little later on, the rice is packed with flavors and leaves a little bite of heat on the tongue. It’s not as hot as Jollof rice in Nigeria can be sometimes. Nigerians are certainly very fond of their pepper.

Ozoz likes to think of her favorite Nigerian dishes as spicy in a multi-dimensional way, with flavors ranging from nutty to toffee and hot, rather than simply hot with pepper.

“There is something about hot climes that makes people eat more spicy food which, rather counter-intuitively, cools down the body’s temperatures, a bit like the theories of drinking hot tea in India.” 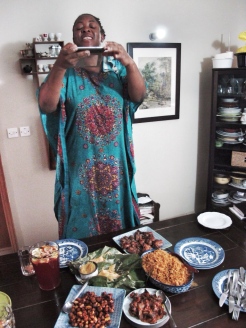 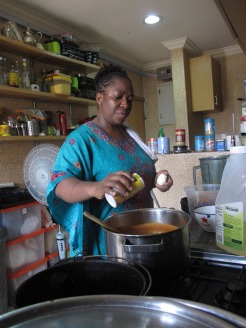 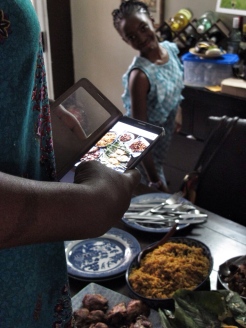 There is regular Jollof rice and party Jollof rice, the latter cooked in a cast iron pot over an open fire, a technique that gives it a distinct smoky taste.

“I’ve realized you can get the same taste on the stove top too though, if you let the rice burn slightly before you serve it,” says Ozoz.

Personally, she wasn’t outraged by Jamie Oliver’s ill-fated attempt at making Jollof rice. Having lived in the Netherlands for four years and being someone who likes to explore dishes from around the world, Ozoz could sympathize with his intent even if she was not impressed with the result. She has learnt by her own experimentation and blogging that it’s best to know the cultural and social context of a dish before you make it your own – a lesson well learned by many of us food explorers in the blogosphere. There’s a fine line between what works and what doesn’t.

“The best Jollof rice I’ve ever had was in Ghana, made with Thai Jasmine rice and cooked by a Spaniard,” Ozoz says and laughs. 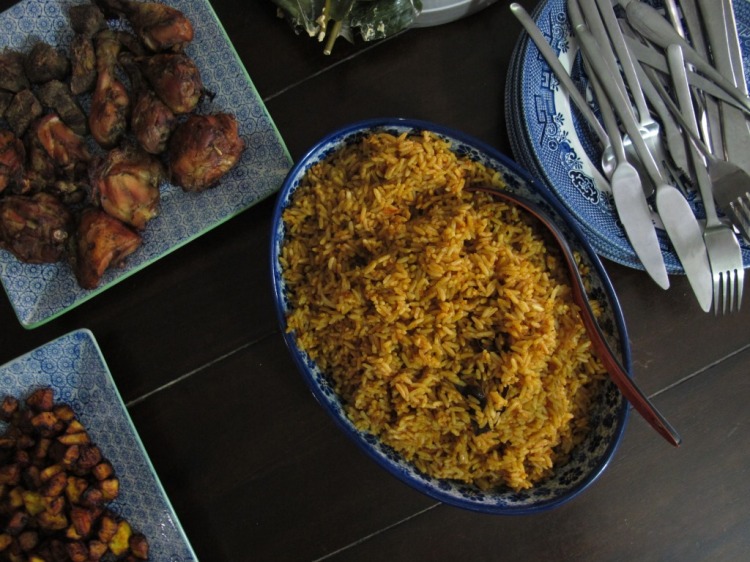 Her culinary enthusiasm and knowledge has inspired many, not only online. In Lagos she cooks for pop-up restaurants once in a while, and she’s a contributor to print magazines too. She dreams of starting a culinary academy, including one for market women where they learn about produce and preservation, and there’s already a cook book in the making.

“I just need the time to finish writing it,” she promises.

Why ‘The Kitchen Butterfly’? You’ll have to visit her blog to find out.

3 thoughts on “Cooking with The Kitchen Butterfly in Lagos – Nigeria”