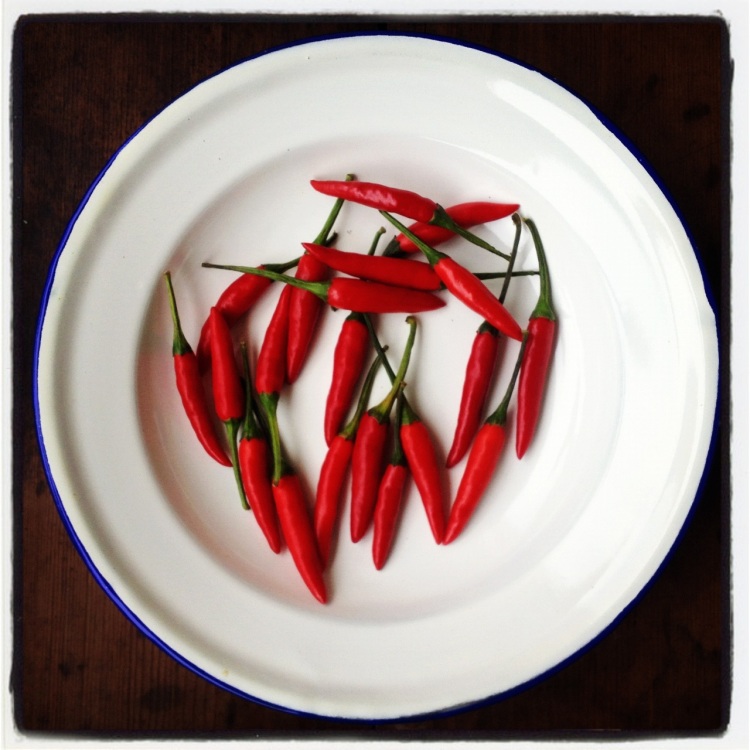 Anyone who has ever been to Mozambique will be very familiar with peri peri, or piri piri as it is also written some times. In Southern Africa you find all sorts of fresh and dried chilli peppers in the shops that are named peri peri, but it is really the local name for the African Bird’s Eye chilli (capsicum frutescens). It is thought to originate in South America, and was brought over to Africa by Portuguese traders and colonialists in the 16th century.

The chilli pepper is sometimes ground into a paste or sauce that is served as a condiment to dishes, or in Mozambique very often used to marinate chicken or king prawns for grilling. In the Democratic Republic of Congo you also find people serving a similar chilli paste with various dishes called pili pili, which means ”pepper pepper” in Kiswahili. It’s made from a different kind of chilli though, a small, orange scotch bonnet or habanero pepper fruit.

I once traveled on a barge down the Congo River for nine days and was taught how to make pili pili sauce by the women on the boat. It is very simple. You just put the fresh peppers in a mortar and pestle with a handful of coarse salt and mix it together to a paste. It is very hot, and it was great together with steamed fish from the river and fried plantains (which we had for breakfast, lunch and dinner).

In West African cooking similar scotch bonnet peppers are obligatory in almost every recipe I have come across. In Ghana you are also often served ‘peppe’ sauce, which is made from the same pepper fruits and tomato and onion. You ground the ingredients to a paste using a local mortar and pestle called asanka and tapori.

In South Africa the fast food chain Nando’s is built entirely on the idea of peri peri, serving delicious hot grilled chicken (even the mild version is hot enough to burn your lips). These days Nando’s is equally well known for it’s humorous and often politically provocative ads (google Nando’s and ads and you’ll find a sample), adding heat to the local debate.

According to ’Pain & Pleasure, Peri-Peri’ (Gwynne Conlyn Publishing/Jacana, 2008), peri peri grows in Malawi, Mozambique, Zimbabwe and South Africa where the climate ”is warm enough to provide just the right amount of stress to make it the fiery ingredient it is.” It is related to the Thai chilli pepper, which you can use as a substitute if you can’t find the real deal.

One thought on “Peri peri, piri piri and pili pili”